Speaking out for a world made right 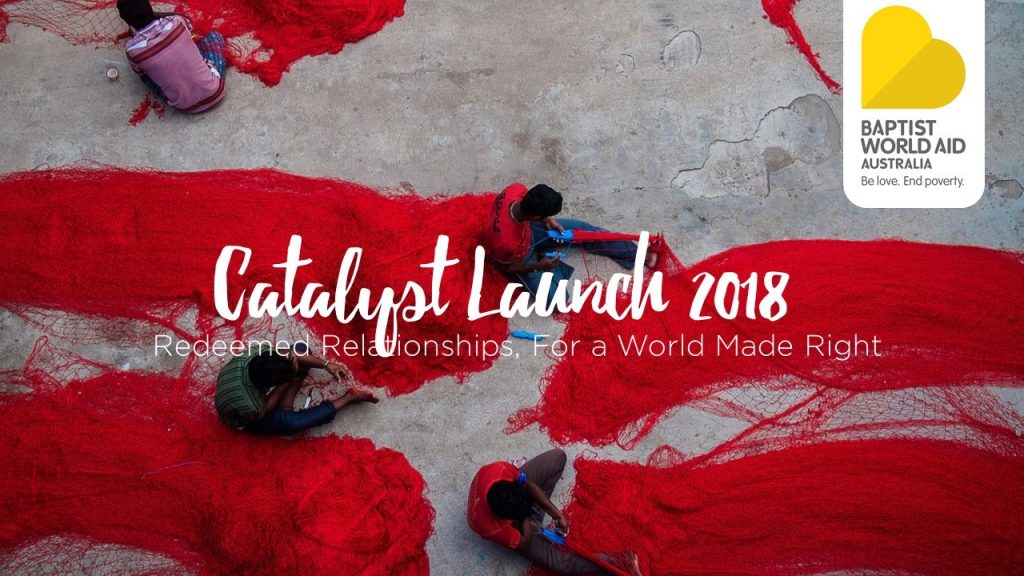 Baptist World Aid Australia will be in Adelaide on Tuesday 20 February, for its 2018 Catalyst Launch.

“Catalyst is a grassroots advocacy program that equips individuals and churches to speak up for the kind of world that God wants – a world free from poverty and exploitation,” explains Baptist World Aid’s Catalyst manager, Eliza Johnson.

Catalyst groups meet regularly to learn and pray about issues of global justice, but, importantly, they also act.

“There are currently about sixty Catalyst groups in churches across Australia,” says Mrs Johnson. “I am constantly inspired by the creative ways they find to raise awareness about issues of injustice in their communities, from movie nights to clothes swaps!”

And Catalyst groups are making a real difference.

“Over the last few years we’ve seen Woolworths and Coles commit to stocking more ethically certified Easter Eggs,” and we’ve seen our Government make huge progress on enacting a Modern Slavery Act in Australia – something we’ve been campaigning hard for”.

In the year ahead, Catalyst groups will campaign on the issue of modern slavery in supply chains and take part in the Australian Baptist Church’s national domestic violence campaign.

“The theme for 2018 is Redeemed Relationships, for a World Made Right,” says Mrs Johnson. “Catalyst members will use their voices to stand alongside people who are victims of injustice, as we work with God to bring about a world made right”.

What’s on in our community

More of a heart than science

Why You Should Give at Matching Grant Time

Creation Care as a Platform to Engage Community

The Loneliness Epidemic: How a simple solution is...

Food or rent – you choose…

Sacred Agents – When the Walls Close In